← back to
Sahel Sounds
Get fresh music recommendations delivered to your inbox every Friday.
We've updated our Terms of Use. You can review the changes here. 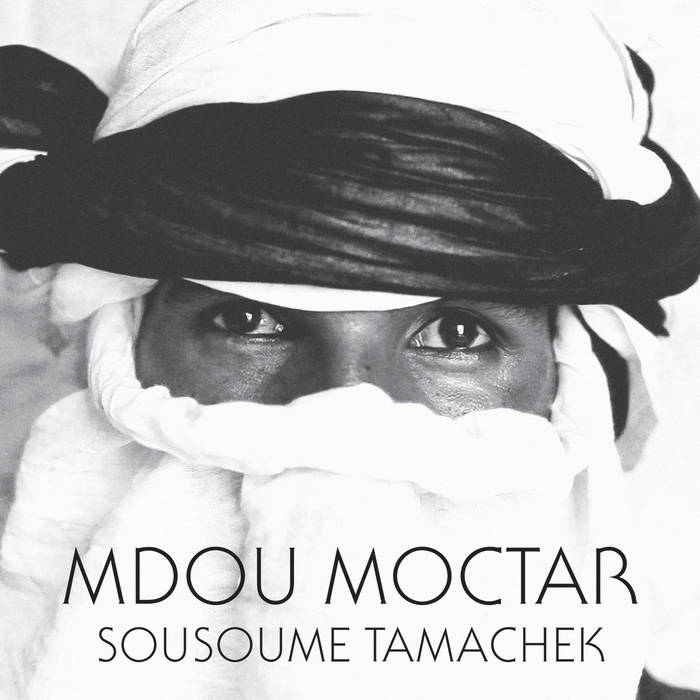 Tom Colquhoun A stripped-down, one-man kinda Tuareg-rock that centres Moctar's sensitive, inquisitive guitarwork through minimal instrumentation and production. Sounds like being in a small club or bar with the man himself on stage. Magical. Favorite track: Tanzaka.

Carsten Pieper Calm and dreamy desert blues album by Mdou Moctar, whose music normally can be filed under "Touareg Rock". Everything sung and played by the man himself. As others noted before, quite hypnotizing music! Favorite track: Sousoume Tamachek.

Music for desert picnics. Tuareg guitarist Mdou Moctar delves into his more sensitive side with a minimal studio recording of dreamy ballads. Thumping calabash, droning guitars, and vocal overdubs evoke an imagined desert soundscape. All instruments and vocals performed by Mdou only, creating a very personal and auteur sessions. Emotive and introspective, exploring themes of religion, spirituality, and matters of the heart.

After his underground success on the pirate mp3 networks of West Africa with his first release, the psychedelic autotuned “Anar,” (2008) he was featured on the Sahel Sounds compilation “Music from Saharan Cellphones” (2011) and launched a successful touring career. In 2012, Mdou relocated from his village to Agadez, the center of Niger’s guitar scene, and formed his band. Over the past years, he has become well known on the international circuit, playing high energy electrified music in festivals and clubs across Europe and North America. In 2013, he released his first international album, “Afelan,” rocking and raw sessions recorded live in Niger. In 2015, he starred in the first ever Tuareg language film, “Rain the Color Blue with a Little Red In It,” a Nigerien remake of “Purple Rain.”

In the past years, Tuareg rock music, particularly that of Niger, has gotten faster. There is a preference for this new sound - both in the raucous weddings of Agadez and in Berlin rock clubs. The wavering guitar solos, rapid fire drums and heavy distortion has become characteristic of the contemporary sound. For Mdou, this was not always the case. Self taught in a religious region that eschewed the guitar, Mdou was forced to learn music in secret. And when he did begin to play, there were no weddings or festivities. His early oeuvre was developed to play at informal private sessions with his friends. In these “takits” or picnics, Mdou and his friends would pass the lazy days together sitting under a tree, drinking tea, laughing, and singing songs.

For his new record, Mdou revisits this “music for desert picnics,” taking his compositions from his youth, and bringing them to the studio (his repertoire of “takit” songs were never recorded and only exist on warbly cassette recordings compressed into low quality mp3s). From love ballads (“Nikali Talit”), religious praise (“Ilmouloud”), to life counsel (“Amidini”), the songs are intensely personal, both in content and in structure. Constructed around the guitar, Mdou plays everything on the album in lush layered overdubs, singing both call and response vocals, playing rhythm guitar, and drumming on the calabash. Produced in collaboration with Christopher Kirkley (Sahel Sounds) and longtime associate Jesse Johnson (Boomarm Nation), the light touch pays respect to the origin of these ballads. The result is a very different side of Mdou Moctar, that of quiet introspection, lifted out of memory for one last time.